Our mission is to build God's Church across generations by living the Eucharist.

the Eucharist as the source and summit of our faith, praying as Christ did, that all may be one;

ourselves to lifelong formation in our faith as we study, pray and actively participate in the Liturgy together;

the strong Tradition of our Catholic faith;

the beauty and sacredness of the earth on which we live;

the dignity of each person as we seek justice for our sisters and brothers at any stage of life;

one another in imitation of Christ through hospitality and charity.

The first Mass in Alexandria was celebrated in a small wooden house by a few local Catholics in the mid 1800‘s when Abbot Rupert Seidenbusch from St. John’s was stranded because the train tracks were snowed in. Since that time, incredible changes have occurred over time here at St. Mary’s.

After that first Mass, the first Catholic Church in Alexandria was built and blessed in 1882 on the corner of Fourth and Elm. The parish had 60 members, and the cost for construction of the Church was $669.10. It was hoped that each parishioner could donate $1.50 to help pay for the church.

The parish continued to grow. In 1902, a gothic-style church was planned and built on the corner of 5th and Hawthorne, where St. Mary’s School presently stands. In 1932, the parish celebrated its golden jubilee. To celebrate that event, marble from 6 African countries was selected to build a beautiful altar.

The faith of the parish brought forth its first vocation to the priesthood. Fr. William Renner was ordained a priest for the Diocese of St. Cloud in 1917. In 1922, Fr. Renner was appointed as pastor of his home parish. The parish continued to grow.

By 1935, plans were underway to build a 600 seat Church under the leadership of Father Renner. Building was postponed until the end of World War II. That stone Church, completed in 1950, was built on the corner of Fourth and Hawthorne. It is now our current Great Hall.
At that time there were 480 registered households; the Church,
which sat 600 people, was built for $220,000. The old church was then used as a school.

In 1957, on a site adjacent to the stone Church and alongside a wooden rectory, a twelve classroom school at a cost of $339,000, under the direction of Msgr. Wrobel. In 1966, beautiful stained-glass windows were installed in the Church.

In 1971, Father Hoppe was appointed as pastor. By that time the Parish had grown to 844 households. In 1971, a new rectory with offices was built.

Ten years later, in 1981, membership increased to 1000 households - 3,610 people. The next year, In 1982, St. Mary's Parish celebrated its 100 birthday. That same year, the first mausoleum was constructed at the cemetery.

In 1983, Father Alexander Ludwig was appointed pastor. At that time, there wereover 1,200 households--an increase of 30% over a 12 year period. From 1984 through 1989 property was purchased surrounding the church to allow for expansion.

In 1997, the present church was built for $4.8 million, comfortably seating 1,500 people. When the present church was built, there were over 1,900 households - 5,094 people, nearly a 60% increase during Fr. Al’s pastorate. That is more than a 40 household increase per year in a 15 year time frame. In 2001 plans were drawn up to renovate and expand the education facility and to build a new parish administration center, known as “Phase III.”

In 2007 Fr. Steven Binsfeld was appointed to pastor St. Mary's Church. Today, the number of parishioners remains fairly consistent, with well over 2,132 registered households--about 5,500 people. There are about 850 young people enrolled in our religious education programs as well as 215 children enrolled in St. Mary's School. 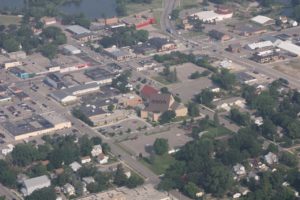 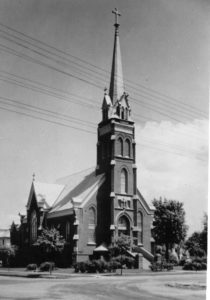 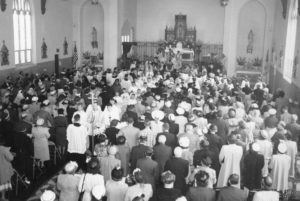